I gave in to an impulse purchase the other day.  I was at Ontario Seed in and I saw seeds for Pacific Giant delphiniums. In fact I had wanted to get Pacific Giant seeds or plants for some time, but I could only find on offer the shorter varieties of delphiniums which are much more popular nowadays. It is understandable that the tall Pacific Giants would not be as much in demand. They take a lot of room, snap easily in the wind and are heavy feeders. However, it seems to me that the very essence of the delphinium is to be big and stately. When well grown, these giant strains look spectacular.

Read more »
Posted by rochefleuriegarden at 11:18 AM No comments:

Wild Life in the Garden


Being right next to a Canadian national park with very few people living around, we see a lot of wild life at Roche fleurie: bears, deer, Sandhill cranes, wild turkeys, squirrels, chipmunks, porcupines and raccoons. Besides these, there are the animals you very rarely see, but are always around, such as foxes and coyotes. Raccoons are the only major pest in the garden. We have rabbits, not the small eastern cottontails most common throughout southern , but the larger snowshoe hares with brown fur in summer that turns completely white in winter to blend in with the snow. They even blend in on patchy snow: in the fall their legs are the first part of their body to turn white, so they become invisible between patches of grass when there is snow on the ground.
Read more »
Posted by rochefleuriegarden at 10:31 AM No comments: 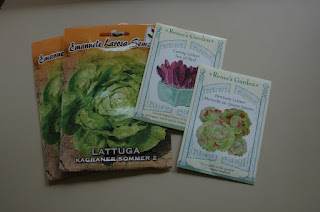 Because we eat a lot of lettuce, we grow a lot. We have tried numerous varieties over the years, and here are the ones which we like best and which do best at Roche Fleurie.

Our “basic” lettuce, the one we seed regularly to make sure we always have some available and on which we rely throughout the growing season, is a German variety called Kagraner Sommer 2. It is a Bibb or Butterhead type lettuce (Lactuca sativa var. capitata), which means that it makes a head but, in my experience, not a very big one, and is much looser than, say, that of Iceberg lettuce. The colour is yellow green. It is a delicious lettuce and very slow to bolt.

Read more »
Posted by rochefleuriegarden at 9:28 AM No comments:

Email ThisBlogThis!Share to TwitterShare to FacebookShare to Pinterest
Labels: Vegetable

Our Very Own Weeds

It is only when you have had more than one garden and have looked more closely at your friends’s gardens that you realize how specific to each garden weeds are. Of course there are weeds we all share, such as dandelions, but each garden has some weeds of its own. I have had two gardens, and the weeds were quite different in each of them.
Read more »
Posted by rochefleuriegarden at 1:36 PM No comments:

Email ThisBlogThis!Share to TwitterShare to FacebookShare to Pinterest
Labels: Self seeding, Weeds 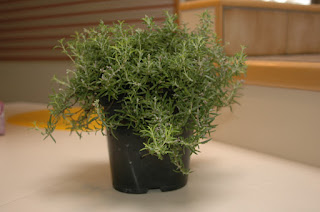 For many years, I had at least one rosemary plant which I would take indoors for the winter. On the whole, rosemary bushes do not like spending the winter in a dry house. In such an environment, they hold on to life for a year or two, but soon give up the ghost.
A few years ago, I discovered that the most important way to succeed in overwintering a rosemary plant is to make sure it is stored in a humid-enough environment. Strangely, for a plant that originates in the Mediterranean, it can actually do without light for months, but not without humidity. I discovered that when I was going away for the good part of a winter. In late November, I potted up my rosemary and stored it in a crawlspace where there is no light, quite a bit of humidity and temperatures that do not reach the freezing point. I had little hope that the plant would survive but, to my amazement, it came out in the spring looking much better than it ever had done after a winter indoors. All it needed before another season out in the garden was a bit of trimming.