In most regions of Canada, roses used to be humorously referred to as "annual shrubs".  There were a few cold tolerant roses among heirloom varieties (such as 'Stanwell Perpetual'), and especially among the Rugosas, but the vast majority of cultivars, including all hybrid teas, required gardeners to take drastic measures to protect them against the winter cold and these measures only worked sometimes.

Then came Felicitas Svejda (pronounced SWAYda) who was born in Vienna in 1920 and passed away on January 19, 2016. For 33 years, she worked at the Central Experimental Farm in Ottawa where she developed hardy shrubs, especially the "Explorer" series of roses which are now grown in many countries with cold winters.

Email ThisBlogThis!Share to TwitterShare to FacebookShare to Pinterest
Labels: Roses


We all know that within an area, growing conditions can vary quite a bit due to micro-climates. However, what is a desirable micro-climate in a temperate area, might not be desirable in a place with cold winters like Canada or much of the northern United States.

While trying to sort a large number of pictures I took in previous years, I came upon photos of a collection of bonsais belonging to the Weyerhaeuser Corporation. That collection was then exhibited at the Weyerhaeuser Company Headquarters, near Tacoma in Washington state. It would appear that now it is to be found (or part of it is to be found) at the University of Arkansas.  It was a magnificent collection. Here are some of the pictures I took. 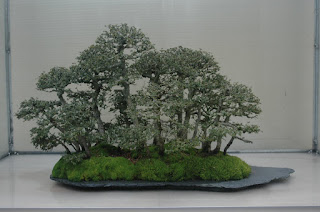 A last Italian garden - Like the garden at the Villa Le Balze, this garden was built by a man who married a woman with a lot of money.

Arthur Acton was a British art collector and dealer who spent much of his life in Italy. His wife, Hortense, was the daughter of William Hamilton Mitchell, founder of the Illinois Trust and Savings Bank.

While the villa was built in the Renaissance, when the Actons bought it in 1907 it only had a park in the English style and a walled vegetable garden.

Arthur and his wife proceeded to create a magnificent Baroque Italian garden, which was preserved by their son Harold, who bequeathed it to the New York University in 1994. 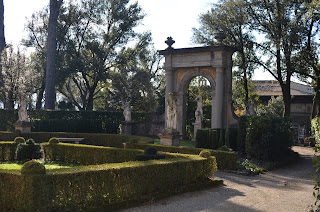