The Building of  Roche Fleurie

“Roche Fleurie”, which can be translated as “Rocks in Bloom”, refers to a house and garden built on an alvar, a limestone plain with little or no soil over the bedrock, in the Bruce Peninsula in Ontario, about three and a half hours north of Toronto. In early summer, these expanses of limestone are covered with the yellow flowers of Sedum acre, a stonecrop (the roches fleuries).

The Bruce Peninsula is the narrow stretch of land between Lake Huron and Georgian Bay.


At first sight, it is not a prepossessing place for garden making as the soil is very poor and shallow and winters are severe. However, although in USDA hardiness zone 5, it has a special climate that allows the growing of plants such as Agapanthus and Nelumbo which do not normally survive in such cold climates.

The organic garden is surrounded by a low stone wall on top of which is a 6 foot trellis. It includes perennials, annuals, rock garden plants and vegetables. Some plants are also grown outside the wall. Most things are started from seed.

In 1992, visiting the peninsula for the first time, we (the writer, Alain, now a retired French translator and conference interpreter, and Lorne, a retired second-hand book dealer) were very impressed how "rocky" the place was. Not only did the limestone come to the surface in many places, but there were piles of rocks that farmers in previous generations had gathered up in the fields.

On holiday the previous summer, we had read "The Good Life" by Scott and Helen Nearing, in which this American couple explains how, without experience, they had built themselves a stone house. We were very impressed by that book and without much consideration, after having seen the Bruce, we decided to buy a property there and build ourselves a stone house! 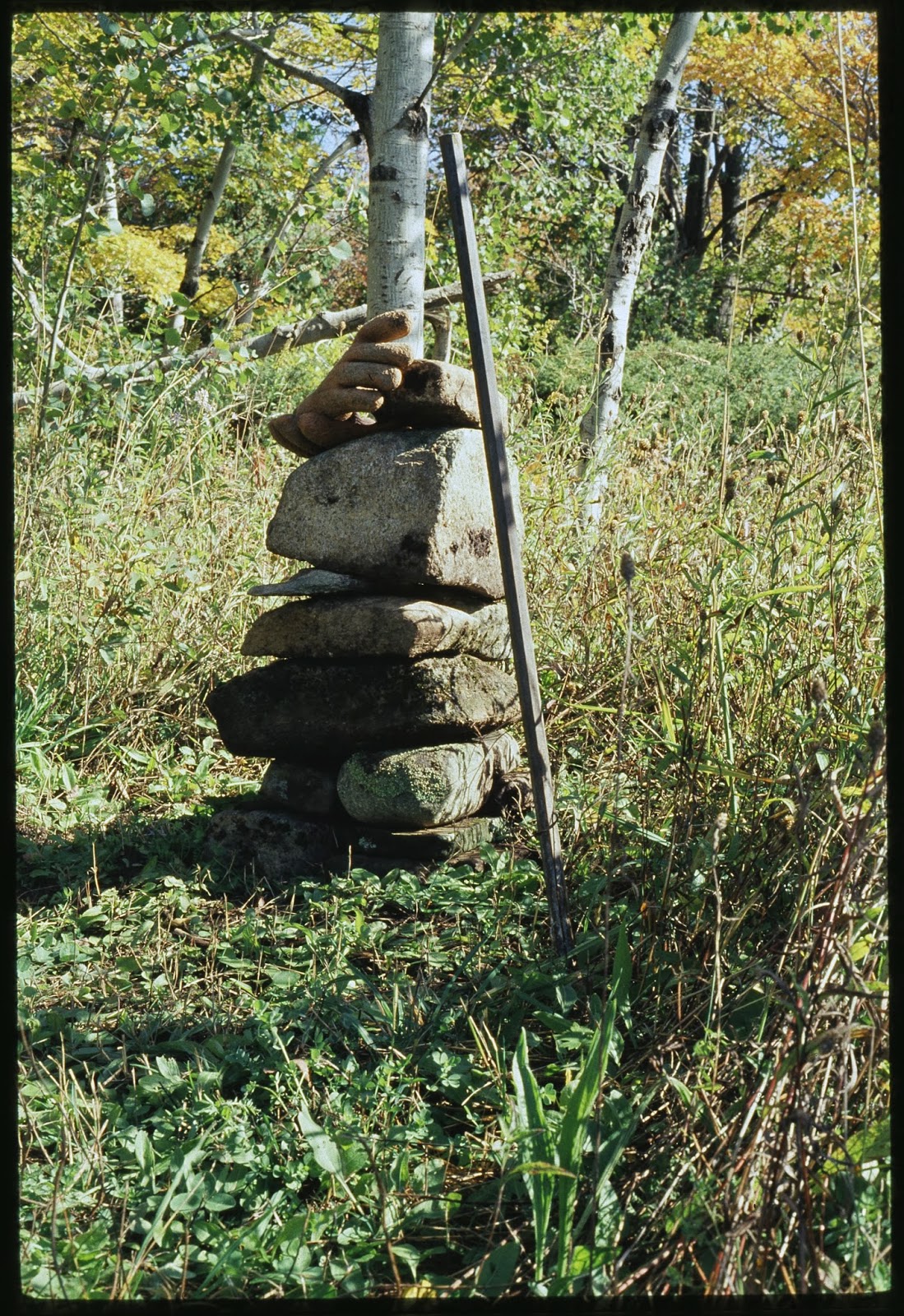 We were without any experience in building. Had we stopped and reflected upon the whole project, we probably would abandoned the idea. However, fired up with enthusiasm, in 1992 we bought the piece of land that had the greatest number of rock piles. Since the Middle Ages, I doubt this has often been a criterion for selecting a building spot.

The summer of 1993 was given over to assembling the stones we would need. We would each set out with a wheelbarrow and bring back stones that were sorted in three piles: natural corner stones, stones with one flat face for the wall facing, and "uglies" to be used as filler inside of the walls. In 1994 we kept on collecting stones. In the end we used about twice the number of stones we had collected in those two years.


In the summer of 1995, we started building the walls using the Nearings's "slipped form" method. We had built the wooden forms at home in the previous winter. The exterior stone walls took just over two years of summers to built. We finished building them in early part of  the summer of 1997. While we were there, we lived in a small trailer we had moved to the property.

We had a small cement mixer and a generator to run it, but the generator produced a deafening noise, and before long we abandoned it. In the end, 98% of the concrete used (many, many tons) was mixed by hand by Lorne in a wheelbarrow. He would pour the cement just made into a bucket which he would take to me up the scaffolding where I had previously piled up all the rocks I would be needing for a "pour". I would place these rocks in the form with the concrete. This work was very demanding physically, as the forms and the rocks were heavy, and much of the work was done on scaffolding. In those years, we referred to our building project as "the Gulag".

In the summer of 1997, we build the roof. This was the most difficult and most stressful part of the whole project. Instead of buying ready-made trusses (we did not even know such things existed), we built the roof from scratch in the traditional method. Part of the stress was due to the fact that the roof had to be completed before winter set in as we did not want to leave an incomplete structure exposed to the elements. Another great source of stress was the fact that neither of us is good with heights, and nailing the roof beams meant hammering at the top of a stepladder set up on scaffolding about 5 meters high.

Once the house was enclosed, we worked on the flooring, then on the partitions dividing up the rooms. Over the previous winters we had bought doors and windows, mostly from Habitat for Humanity. In winter, Lorne took a course in wiring at a community college, and I took out from the public library all the books I could find on plumbing.  I had drawn myself the plan for the house and had kept the plumbing and wiring as simple as possible.

As we had chosen to build the house far from the road, getting connected to hydro was a very expensive proposition. For the same price we could get an off-the-grid system, which is what we did. All our electricity comes from solar panels supplemented when the days are short by a generator.

By around 2004, we had given away the old trailer and had moved into the house. There was still a fair bit of work to do, but we were able to work at a more relaxed pace. In 2007, I retired and we moved permanently to Roche Fleurie. I have never worked in horticulture, but I was a Master Gardener for over 15 years and, when I started gardening, I took a few courses in horticulture from Guelph University. I used to write articles for gardening magazines in the U.S. and Canada, and our old city garden was featured on two television programs.

The summer of 2007 was mostly given over to moving to Roche Fleurie, but in 2008 we were able to start building the garden. That project went much faster than the building of the house as we lived on the spot and were able to work full time at it. Given our experience in building with stone, we decided to surround the garden area with a low stone wall topped by a trellis. The stone wall rests on the bed rock. This meant digging a trench for the wall foundations.


All the garden beds are raised and those closest to the house are enclosed by low stone walls that were also poured using the slip form method.


We also decided to lay flat pieces of limestone on the garden paths. By the time the paths were paved, we had used just about all the stones readily available on our 35 acres (plus most of the stones on one of the neighbour's property who had given us access).


These paths and the garden walls took about two years to build, but the walls save us a great deal of work. The garden is deer-, groundhog-, and skunk-proof (but not raccoon- or chipmunk/squirrel-proof). The greatest advantage of the stone wall is that weeds can come in from seeds blown in, but not from weed roots along the perimeter of the garden. So weeds can be brought in, but cannot move in.

This blog is in most part a diary of the seasonal activities in the garden.