Late August is the time when there are still some blooms, but they look rather tired. Somehow, even flowers that have just opened seem tired.

More probably, it is the gardener's outlook which is defective. Even if the days are still warm, they are getting shorter and shorter.

Here are some of the things that are blooming now at Roche Fleurie.

Read more »
Posted by rochefleuriegarden at 8:57 AM 7 comments:

One of our shortcomings as a gardeners is to be too inclined to leave attractive weeds to prosper. Some years we am more strict, others more lax, depending on the situation.

This year, for instance, many of the vegetables that were planted are not going to produce much. Many had to be replanted several times after having been dug up by raccoons early in the season.

Only one cucumber plant and one zucchini plant eventually grew.   Only a quarter of the pole beans planted survived the raccoon onslaught. They are growing and we have started eating them.

However they are being invaded by Morning Glories which we decided to let grow. There might not be many beans, but at least the poles are not naked. 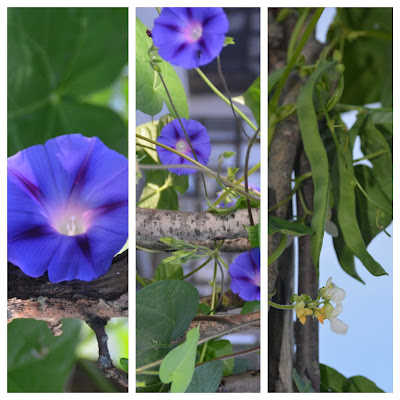 A Week in the Shuswap and the Okanagan

The Shuswap is a lake and area of British Columbia where we have just spent a holiday week.

In Praise of Blackcurrants

It has been an excellent year for blackcurrants (Ribes nigrum). In fact we had a bumper crop.

Some years there will be a late frost when the blackcurrant bushes are in bloom, which reduces yield. But not this year.

This means that we have been very busy picking berries and turning them into desserts, jam and, most popular of all in this household, crème de cassis, the delicious blackcurrant liqueur.

Read more »
Posted by rochefleuriegarden at 11:56 AM 14 comments: