I have mentioned that the garden is on an alvar. However, I have never properly explained what an alvar is.

Wikipedia describes it as: " a biological environment based on a limestone plain with thin or no soil and, as a result, sparse grassland vegetation. Often flooded in the spring, and affected by drought in midsummer."

Here is what part of the alvar looks like at Roche fleurie. As you can see on the right, a stone pavement, just about as smooth as a concrete floor, which is crisscrossed by crevasses such as the one on the left. 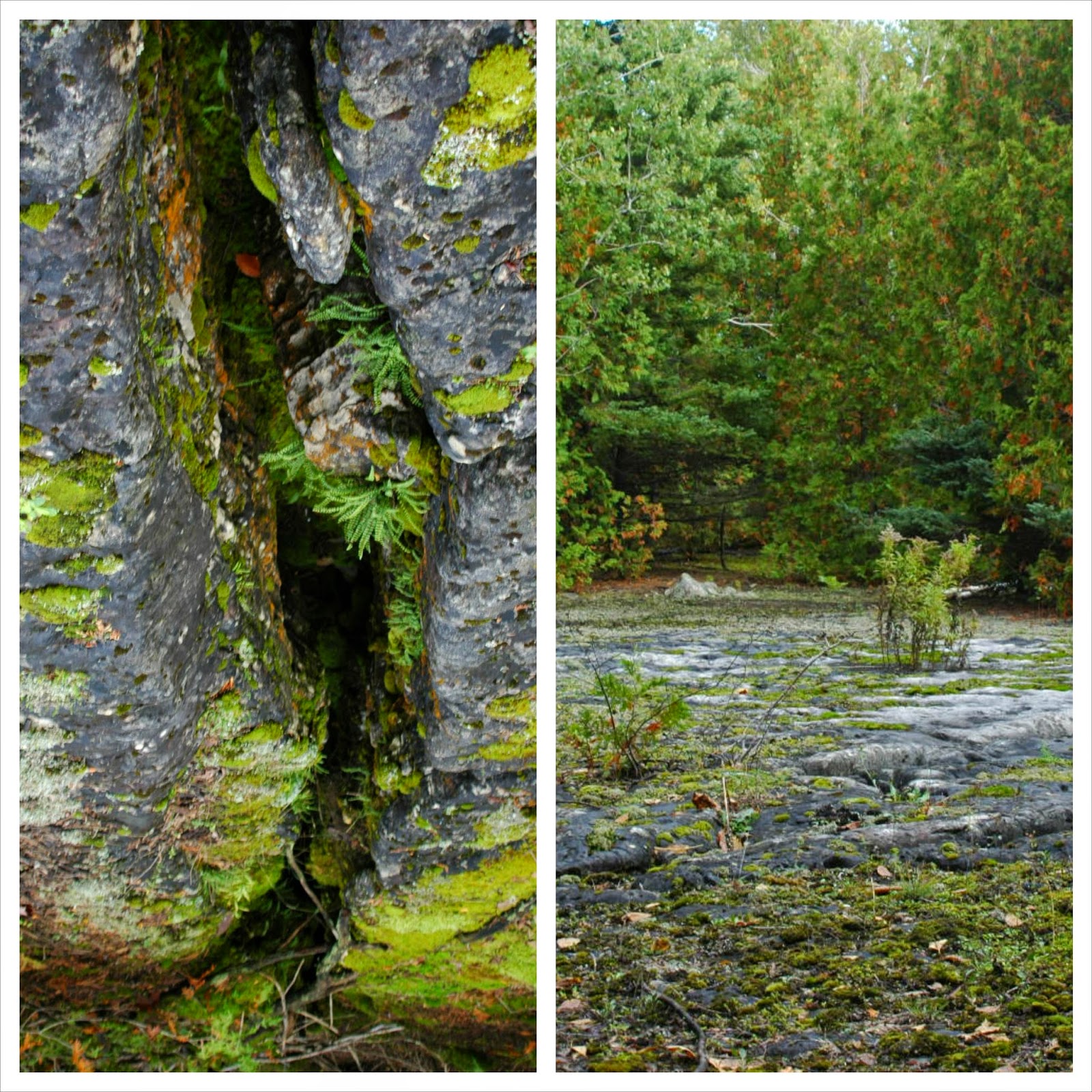 The crevasses form regular rectangles  covered with moss and lichens, when, as in this case, they are in the shade. 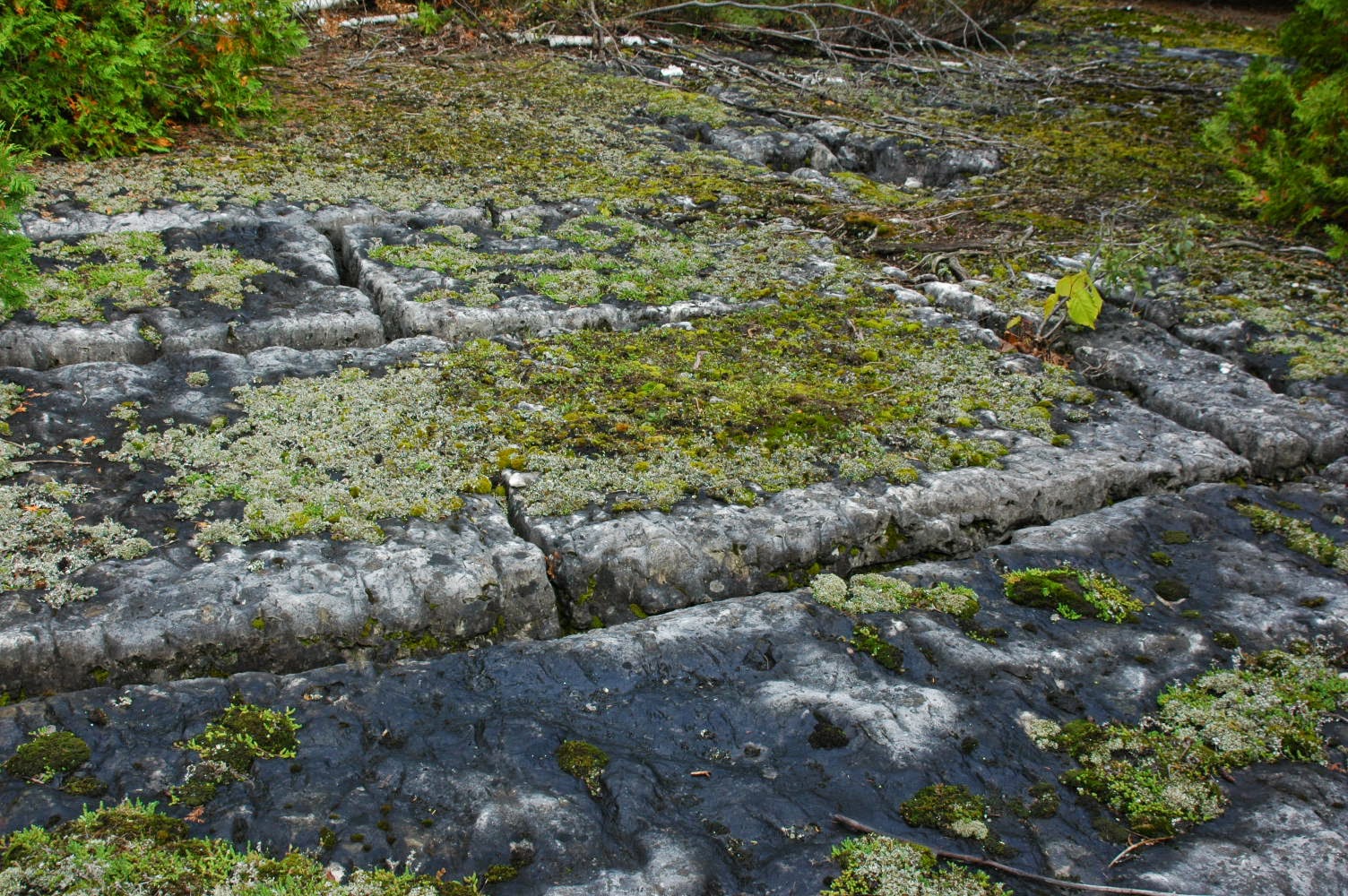 Inside the crevasses, the most common plant is the little maidenhair spleenwort, Asplenium trichomanes (bottom left in the picture), but you sometimes also find the Christmas fern,  Polystichum acrostichoides, on the right. Both of these grow in moss and send out roots in the limestone. There is no soil.

When the limestone is in the sun, it gets covered with Sedum acre, the plant pictured in the masthead of this blog, which gives its name to the garden.

You might wonder how trees manage to grow there. They can only survive if they get their roots in one of the crevasses. When there is shallow soil over the alvar, you can guess where crevasses are because that is where the trees are!

I expect there are small caves in some of the crevasses because, when they are wide enough, they seem to be popular home sites for porcupines. Wedged in a cave below ground, no one can get at them, and it is warmer in winter. Snakes are also supposed to overwinter in these crevasses.


Below is how the place looks where soil has accumulated over the limestone plain. Trees are growing where  soil is deep enough. There is no tree in the foreground because the soil is just about 6 inches deep.  The small trees beyond the foreground on the left probably have their roots in an covered crevasse. They might survive for a couple of years, but when we next get a dry summer (as we regularly do), they will dry up, if they have not been able to sent roots deep down.


The garden was made in an area just like the one above.  In places, the soil is only about one foot deep. The deepest soil in the garden is four feet deep (much of it sub-soil). It was quite a shock when I realized how little soil there was. Our previous garden was in an ancient river bottom where in some areas the top soil was five feet deep.


Raised beds are a must, if only to ensure there is enough soil under the plants. Raised beds provide good drainage and since the water table can be quite high, most plants can sink some roots to the water below. This means that little watering is required. In fact, all watering is done by hand.

When the beds were created, top soil was removed where paths were to go and was replaced with limestone. This extra topsoil was put on top of the beds.  You can see how close to the surface the bedrock is.

Gardening in such conditions is a lot easier than you would expect. We did not know there was so little soil, when we bought the property.  However we were aware of the many wonderful gardens in the area and of the variety of wild flowers.

It turns out an alvar can be a great place for a garden!
Posted by rochefleuriegarden at 1:48 PM