"Cherry Garden" - Portrait of an Iris

I thought I would write a plant portrait of "Cherry Garden" because what I find in various references simply does not do it justice.

These references all neglect to mention what is most characteristic of it.


I have had "Cherry Garden" iris for quite a few years, but having got it in a plant exchange, I did not know its name.

In 2016,  I mentioned this purple iris in a post and two readers, Linda B. and Angie, identified it as "Cherry Garden".

It is one of the major advantages of having a gardening blog that you learn a lot from other gardeners.

It is not a modern variety. It was introduced in 1966.

As for hardiness, depending on which reference you use, it runs the gamut from zone 3 to zone 7. My own experience is that zone 3 is not far from  the truth.

It is described as a mid-season bloomer. At Roche Fleurie all dwarf irises bloom at roughly the same time at the end of May.

So what is most characteristic about it?

At Roche Fleurie, "Cherry Garden" is much more prolific than any other irises .

If you plant two tubers, you are likely to have six the next year.  This might be a blessing or a curse, depending on whether you need a lot of irises or whether you want the clump to stay the same size - although removing extra tubers is not a serious problem and it needs to be done only once a year.

Some northern European gardeners say it is not particularly prolific in their gardens, but I believe this is due to their climate.

Not only is it prolific, but it is also a generous bloomer.

Among the various irises in the garden, several varieties, especially old-fashioned ones, resent being transplanted and might take up to four years to bloom after being divided.

"Cherry Garden" blooms profusely the very next year after you divided it. 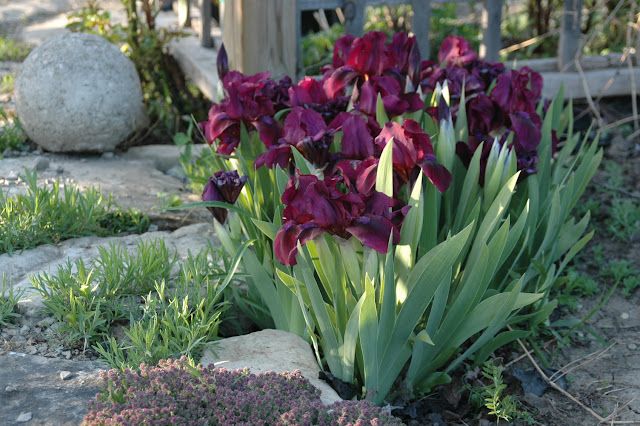 Posted by rochefleuriegarden at 11:06 AM