The previous post on slugs brought back to mind the smooth green snake, because slugs are part of its diet!

I have mentioned that snake before, but not in detail. I wish I could convince this beautiful small snake to settle in the garden, but that leads me to a conundrum - perhaps it would if I had more slugs!

They are not rare, but I only see one every three or four years.

They keep to grassy area and, as you can imagine from the picture, with green on green they are very hard to spot.

It would appear that they will stay perfectly still, to blend in the vegetation. This can be a drawback for them.

The picture above was taken after I had released this green snake last summer. For several minutes, it stayed where I put it, not  moving a scale, convinced it was invisible.

In the grass, being perfectly still is an excellent idea for a green snake. On bare earth, it might be a liability. I expect they are rarely out of the grass as around here there is freshly turned earth only in the garden.

In my experience, they are not in the least aggressive and usually allow humans to come close, never trying to bite you.

I have read that they will become defensive if handled a lot. They are non venomous and are described as docile.

Apparently, like our garter snake, they can smear attackers with a nasty-smelling fluid. I have never experienced this. 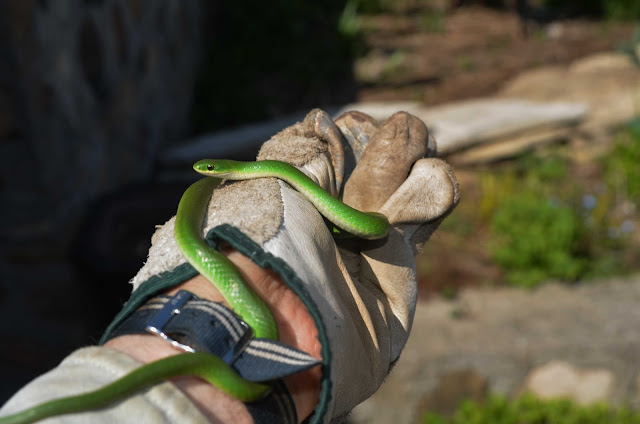 The smooth green snake (Opheodrys vernalis) is hunted by the red-tailed hawk, great blue heron, rough-legged buzzard, bears, raccoons and foxes. In our area it would also be eaten by Sandhill cranes.

One of the main reasons they are not rare in our area is that there is no industry or agro-business and consequently no use of pesticides.

Beside slugs, its diet consists mainly of insects and spiders, including spineless caterpillars, daddy-long-legs, moths, ants, snails and worms.
Posted by rochefleuriegarden at 3:24 PM