A "maximus" we could do without 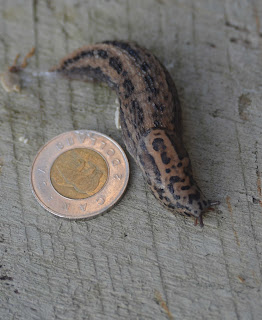 Through my gardening years, I have had to deal with only two kinds of slugs, both a few centimeters long (I call them the whites and the greys, not having the required competence to identify these slugs by  their proper scientific names).

The first, the little whites, vary from beige to brown and have very thin skin (they can easily be dispatch with a trowel). The other kind (the little greys) are always the same colour - dark grey on top with a snow-white belly. These have a very thick skin the texture of a piece of leather.

However what this post is about is a third kind of slugs for which I did find the Latin name: Limax maximus. Here is another photo of it in all its splendor.

Commonly known as the European giant garden slug, or the spotted garden slug , it appeared in the garden for the first time last summer. No doubt it hitched a ride in a potted plant. In fact it has probably been in the garden for a while as I did find six of them over the summer.

I was shock to read in the Wikipedia article about Limax maximus that "The adult slug measures 10-20 cm (4-8 in) in length".  This means that what for me were humungous slugs were actually babies! How much of a hosta does an 20 cm slug eats in a night?

Reading that "This species has a very unusual and distinctive mating method, where the pair of slugs use a thick thread of mucus to hang suspended in the air from a tree branch or other structure." I realize I will now have to look up as well as look down for slugs! 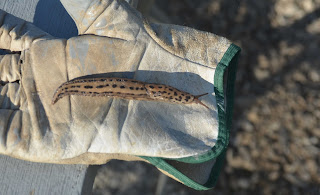 Wikipedia adds "Although native to Europe, this species has been accidentally introduced to many other parts of the world."