The news are full of comments about how bad the weather has been in the northern hemisphere, particularly in the American Mid West and in Eastern Canada, and we wonder how the snow and very cold temperatures will affect ours gardens. Although the intense cold is not welcome, a great amount of snow is good for perennial plants, if not for humans.

Of course in milder places, like the southern United States where winters are normally very mild, the cold that was experienced earlier this year will kill a lot of tender plants.

A case in point is the winter of 2016-2017. This was one of the mildest winters we have known in this part of the world, with several thaws in the coldest months of the year, something we are not used to and something we paid for dearly later on.

Many tender plants that normally spend a cozy winter under a blanket of snow started to grow in the mild spells and were killed when cold seasonal weather returned. Here are a few examples of plants that did not survive the 2016/17 winter because of  the irregular snow cover that winter.


Other plants did survived but barely. Some, especially bulbs,  were in large part decimated.

The clump of Crocosmia "Lucifer" pictured below in 2016 was very lush and had been increasing for many years. In the summer of 2017, only a few sprays were left. My two other cultivars of Crocosmia, less hardy than"Lucifer", completely vanished. 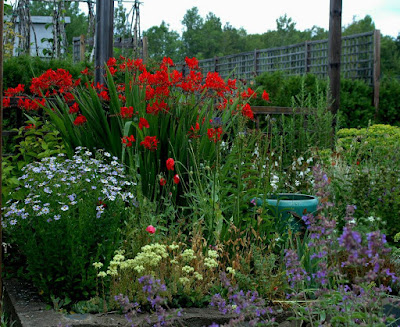 The same thing happened to all of these:

The list of plants that barely survived the previous winter due to poor snow cover goes on.
I could add, for instance, Agapanthus or Trifolium repens 'Atropurpureum'.

Many of the plants listed above are rock-garden plants. Although on the whole, these are very cold-hardy, a warm spell in winter will often do them in.

With a good snow cover, I can grow in my zone 5A garden, a better selection of plants than I could in my previous zone 6B garden, provided we can avoid winter thaws.

We had a fair bit of  rain last week. Fortunately the snow accumulation was so thick that plants are still well-insulated. We can only hope it will stay that way till late March.

Posted by rochefleuriegarden at 9:54 AM

Email ThisBlogThis!Share to TwitterShare to FacebookShare to Pinterest
Labels: Hardiness