I am growing this vegetable for the first time this year.  It is supposed to be an heirloom vegetable that has been grown for centuries . Although it is called spinach, it is, in fact, a chard (Chenopodium capitatum).

Like all chards, it is easy to grow.  In my book at least, chards are not particularly nice tasting. However as far as chards go, this one is not bad. It does not have the strong metalic taste they sometimes acquire. The youngest leaves of any chard are always tastier

In the photo above, the fruiting parts look most unusual, but when the plant starts going to seed in the garden, you recognize it as a chard. 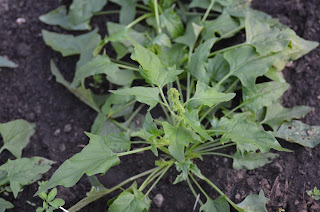 I think it looks best as decoration on a salad plate or in an arrangement (see the photo below). The red seed clusters are edible, but they are described as being bland. In fact they have a definite taste, not unpleasant but difficult to describe.
It is supposed to grow 1 to 3 feet. Here it did not reach much more than one foot. 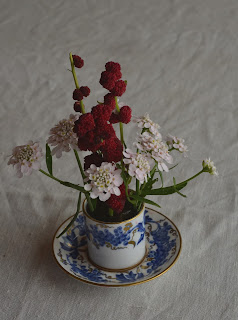 I expect I will grow it again but use it as a decorative plant rather than as a vegetable. Like other amaranths, it is both good-looking and edible. A drift of them in a border woud look attractive. Of course it all depends on how long the seeds stay attractive. They seem to survive for several weeks and then new ones ripen. They have to be eaten fresh as insects appear when the seed clusters get old. 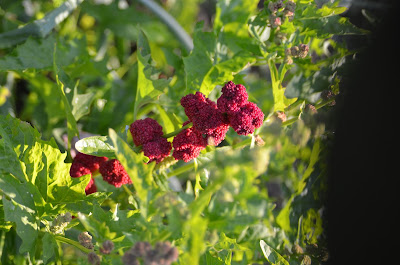 The chard I like best for eating is Italian, and I think is referred to as "erbettta". I get it from Larosa Emanuele Sementi whose seeds are distributed in upscale grocery stores in Canada. The leafs are relatively small and tender.

Posted by rochefleuriegarden at 8:59 AM