I thought I would do a few posts on what is in bloom just now, selecting plants by colour. I am starting with pink. Because so far we have had a relatively cool (as well as very wet) summer, many of the things that normally would have finished blooming some time ago (for instance, peonies) are still looking good. Here are a few examples of what is in bloom in pink at Roche Fleurie. Of course, roses make up the majority of the pink blooms.


Here is a close up of the same (John Davis), a wonderful rose that hardly has any thorns. It is also very cold resistant, disease resistant (at least in this garden) and grows just as well as a shrub as it does as a climber.


A cultivar of Lamium maculatum. This is a plant you can put in a very inhospitable corner in the shade, and it will still look good. This one is in the shade of the house (lots of light, but never any sun). It is straight on the rock, its roots have found their way to subsoil between the cracks.

As I said above, because of the cool weather, many peonies are still in bloom. Here are an unidentified pink old-fashioned and a close up of Sarah Bernhardt bloom.
The following is a nice enough plant, but it does not have the presence of its cousin Phlomis russelliana, a larger version of the same plant, but with yellow blooms.
The individual blooms of the Charles de Mills rose below right seem red, especially when they are just opening, but the general effect is pink. Left of it is Jens Munk. Both are  tied to the trellis, Charles de Mills responds beautifully to tying,  but not Jens Munk which would prefer to grow as a shrub. 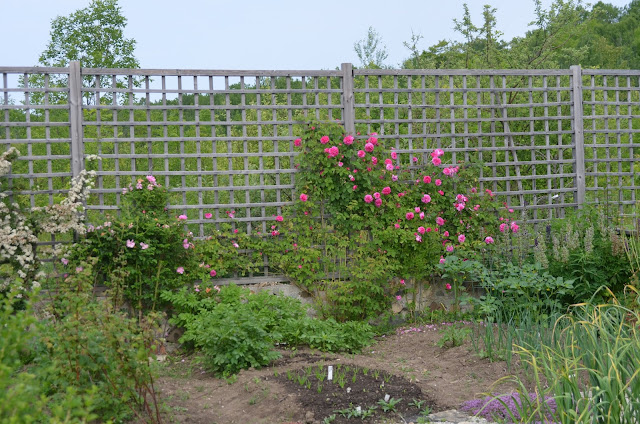 Once again, because of the cool weather, a pink lady slipper is still hanging on in the wild garden.

This clump of pyrithrum has been the same size for over five years. I am planning to divide the clump, even if it is not very big, in order to try to force the plant to increase.

I close with a shot of pinkish Oxalis and alstroemeria growing in pots by the door. 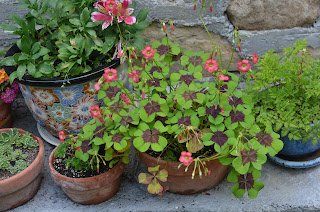 Posted by rochefleuriegarden at 10:44 AM