One of my favorite new plants this year was Campanula incurva.- - a rock garden bellflower with large blooms, almost as big as Canterbury bells (Campanula medium), but flowering on very short stalks and all the bloms facing up, so they look good from a distance or seen close-by.


Unfortunately, this bellflower has one drawback, it is monocarpic, which means that it is one of those plants that can survive several years, but the year they bloom is the year they die!

Not very surprising when you consider how much bloom our plant produced. It must have simply exhausted itself.

The above picture was taken at the end of July, and the plant has been in bloom ever since. Although for the last two months it has not flowered as profusely.


Still, as you can see from the picture below that it is still sporting some buds in the middle of November and after two nights when temperatures went down to -3 C. 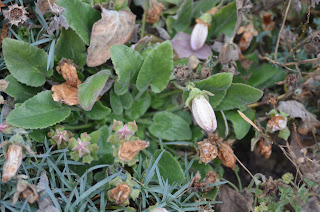 I hope against all reason that it will survive the winter as the plant shown above is a side shoot that has developed from the mother plant this summer. Perhaps side shoots can survive? However the fact that despite the frost, it is still lush and green, which means not going dormant, is not a good sign.

Also called Campanula leutweinii, it is supposed to be hardy to zone 6. The garden here is in zone 5, and we have it  growing in a raised bed which means that it is in a spot colder and more exposed to the weather than the rest of the garden.

It apparently can grow in full sun to partial shade. Here it is in the sunniest place in the garden.

I have had it for three years, a gift from our friend Bill Snowden who, I believe, grew it from seed.

This year was the first year and presumably the last, that it bloomed. It also comes in blue. Ours was white, but with a faint tint of blue. We had two plants of it. Here is the second one. When it started to bloom, it quickly spread out and swamped its neighbours. It was too attractive to be ruled in.

In previous posts, I mentioned the grafts I had made on an apple tree, complaining that these grafts took, but the tree did not produce.

I was too impatient.

After being grafted five years ago, this year the tree was covered with more apples that we can use or give away. There are still lots that will, no doubt, be composted. 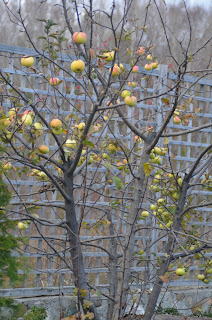 Some noticed I had not been writing as much recently. I have decided to take a "blogging holiday". I should no doubt be back in the spring, if not before.

Posted by rochefleuriegarden at 9:56 AM