In late September this is the shrub that blooms most profusely at Roche Fleurie.  The common name is Bush Clover. Being of the pea family (Fabaceae), the flowers look very much like some clover flowers, but the plant forms a shrub, hence Bush Clover.

It is said to prefer light sandy soil, but I expect it is rather adaptable as here it is growing in heavy clay and seems to be doing very well.

It apparently can reach almost 2-3 meters. Our plant, which is about five years old, is about a meter tall and perhaps a meter and a half wide. It would no doubt grow taller, if it was not cut down in the late autumn.

They grow in full sun and require very little maintenance. They are supposed to be hardy to about -30C.   Since they bloom on new wood, they should be cut to the ground in late autumn or early spring. They look unkempt if allowed to grow tall.

It is a pity we planted ours near a path as it half blocks it. However since it is cut down in the fall, you brush against it only towards the end of the season when it is at its best. 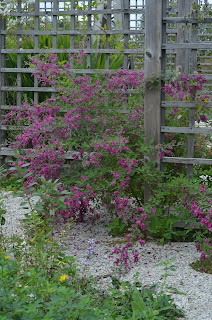 It was named by the botanist Michaux after one of his friends, Lespedez, a Spanish governor of Florida.

A native of Japan and China, it can be grown from seed in spring or from cuttings in summer. There is a white variety. 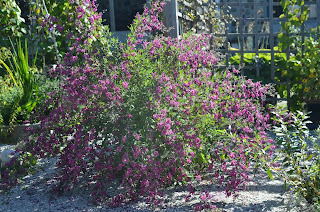 We have never grown Lespedeza bicolor, which is supposed to be hardier and blooms light purple in summer.

It blooms at the same time as Buddleja and Sweet Autumn clematis (Clematis panciulata or C. ternifolia) as can be seen in the picture below. 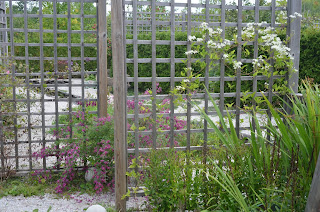 Posted by rochefleuriegarden at 6:36 PM