This is a gardening blog, so the vast majority of the posts have to do with the garden, its plants or its design.

For a change, it might be useful to talk about the location of the garden in order to place it in its context and give you an idea of its surroundings.


The garden is in a region of Ontario, Canada, know as the Bruce Peninsula. If you look at the following map of the Great Lakes, you see on the right hand side the name "Tobermory" in red. The "Bruce" is the peninsula that stretches south of the village of Tobermory.

It is a long and narrow stretch of land whose climate is influence by the large bodies of water that surround it. On the whole, all this water makes it cooler in spring and warmer in autumn than places that have the same climate, but are situated more inland.

Traditionally an economically depressed area, there has never been much industry and only marginal agriculture, because the soil is very thin. In some spots the limestone bedrock comes to the surface. 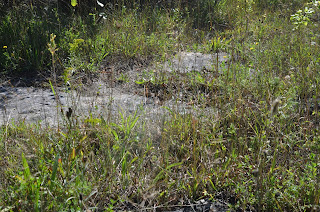 Little agriculture and no industry means little or no pollution. Nowadays, the Bruce prides itself on its two Canadian national parks, and its main industry is tourism.

People are attracted not only by the physical beauty of the place but also by its very rich flora and fauna. I have often shown pictures of the numerous wild flowers, and written about the various snakes and other animals that visit the garden. These testify to the rich biodiversity of the Bruce which has been designated by UNESCO as a Wild Biosphere Reserve.

All along the east side is a cliff called the Niagara Escarpment (one end of  this cliff, which crosses all of southern Ontario, is in Michigan and the other one in New York state).

Niagara Falls is the water of the Great Lakes falling off another part of this very same cliff.

On the west side, facing Lake Huron,  instead of a cliff you have beaches (rocky or sandy) with a very low gradient. If you walk into Lake Huron from the shore, you will have to go a long distance before water reaches your shoulder.

As a place to garden, the area has one big drawback: the soil tends to be poor and very thin
But it has some advantages. The snow cover is very reliable which means that a greater diversity of perennial plants can be grown than in places with much milder climates like the Toronto area.

Most of the houses in the Bruce are summer houses. This is Labour Day, the last long weekend of summer. Most summer residents and tourists go back to the city this weekend. On the rural gravel road pictured below, which is near the garden, instead of having perhaps ten cars go by every hour, it will now be at the very most ten cars a day till next spring!

Posted by rochefleuriegarden at 4:56 PM