I have some questions about two spring bulbs that some of you might be able to help me with.

The first one has to do the small daffodil, Narcissus bulbocodium, often called hoop petticoat daffodil.


I attempted several times to grow this bulb in our old garden where the soil was rich and deep, but I never succeeded. The bulb invariably died in the first winter.


When we bought the property here, I put some bulbocodium bulbs in a field where the soil is at the very most 6 inches deep. It gets flooded in winter and spring as well as getting baked in July and August.

They have survived over many years, but they have not flowered much. Five or six blooms a year is all they produce. Yet there is always a fair bit of foliage. This spring I decided to dig up a clump with no blooms.

To my surprise, there were literally dozens and dozens of bulbs. 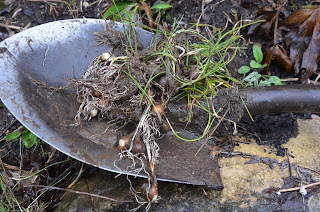 They have done very well as far as reproducing (there are 25 times more bulbs than I ever planted). I only dug up one clump, and there are many clumps.

You might think they are too crowded, but why didn't they bloom more in the first few years when crowding was not a problem?

Any suggestions to have them bloom?

My other Spring bulb question has to do with Puschkinia scilloides var. libanotica.

In the old garden, there was a clump of Puschkinia. It produced beautiful, lush flowers.

When we moved here, I took it along, and it is still doing beautifully.

However, every time since that I have tried to buy Puschkinia, both at the old garden and at the new, I have ended up with these puny little flowers which are never as nice as the old ones (they are about half the size of the old ones and much less numerous).

The name Puschkinia scilloides var. libanotica. suggests that there is the species and then a cultivated variety called Libanotica. Some reference treat scilloides and libanotica as synomyms. This has been my experience in commerce and reference works. I  have never seen a distinction made.

At first I thought they might be bigger because they were older (they would have been originally planted at the old garden in the 70s at the earliest).

However I am more inclined to agree with my friend Glen who is of the opinion that it is a different cultivar. 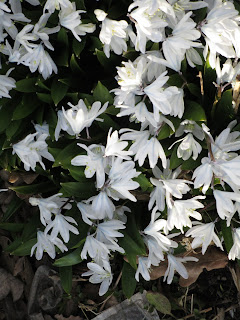 Any ideas to explain this difference?
Posted by rochefleuriegarden at 12:51 PM