A Summer of Revenants

The last four or five weeks have been rather wet in our part of the world, and hot days have not been numerous (hot days for us are above 25 C).

Even if humans do not enjoy that kind of weather, most plants do. In fact, a good number of plants I thought dead, some for many years, have made a comeback.

I expect the extra water is the reason for these "resurrections". The most spectacular is Camassia. 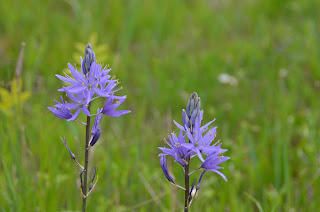 I bought Camassia bulbs more than ten years ago. I planted them in a damp area of the field and waited for them to grow. Nothing happened. I thought they might have rotten or somehow died over the winter as I never saw a Camassia.

In fact, they never bloomed through all these years, but I expect they produced some leaves which I did not notice as they were scattered among other plants in the field.

This year, three of them bloomed. Once I was able to see what their leaves looked like, I identified a dozen plants or so. 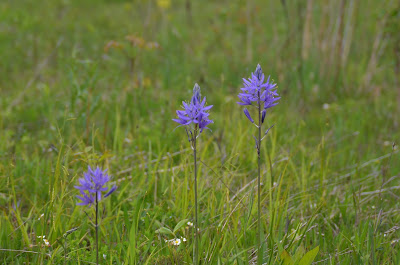 I don't know if they will bloom only in wet years or, now that they are presumably better established, they will bloom every year in the future. Unfortunately, they seem to flower for a very short period (less than a week).

Ben at Fiddlehead (a wonderful nursery, which specializes in perennial edible plants), tells me that you can wrap Camassia bulbs in foil, like you would a potato you wanted to bake, throw them in a wood stove and, after three days (!), they are cooked and ready to eat.

Crambe cordifolia also made a come back. However that was not as surprising since in this garden this plant seems to be on a two year cycle, coming back up only every second year.

There was no sign of it last year, but it is now timidly back (though I doubt it will bloom). 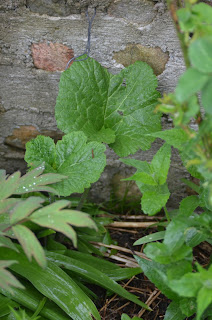 Some plants, that came back regularly over the last few years but did not bloom, have finally shown some flowers this year.

This is the case of a crab apple whose variety name I lost. It also has been in place for over ten years. It has never shown any flowers in  previous years, but it has bloomed generously this year. 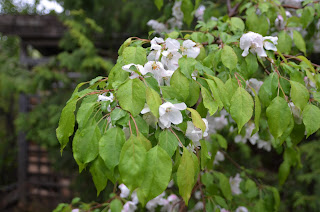 The iris below also bloomed for the first time. It was planted in 2012. Acquired at a plant exchange, I do not have any variety name. I am glad to see that it is probably an older cultivar as the petals are not too frilly, and the plant stands up very well without any support. 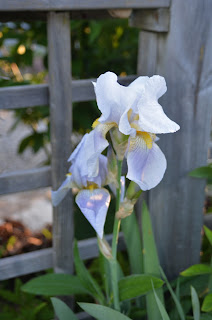 This Rogersia, emerging out of the woodruff, was thought to have given up the ghost in 2015. Obviously, the extra rain encouraged it to make a last try. 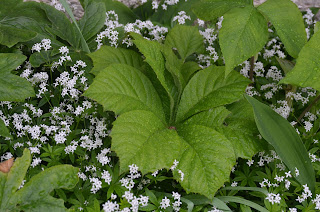 Finally,  a "Kinshi" tree peony bought last year was not expected to bloom right away. However it produced one sensational flower. 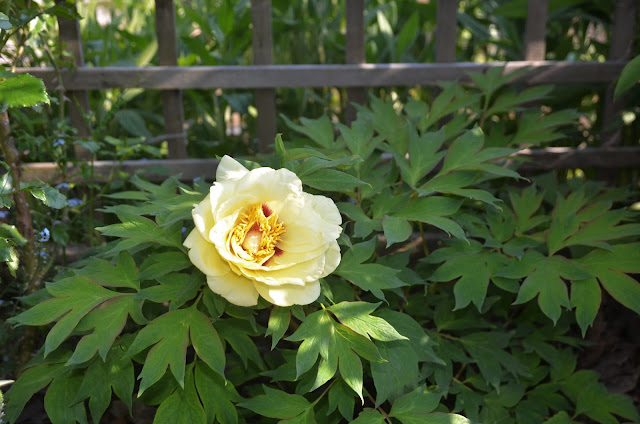 Posted by rochefleuriegarden at 12:44 PM