On the Inconstant Lupines

We used to have a nice drift of Russell lupines as you can see from the photo below. "Used to" is the operative phrase. There are still a few lingerers here and there, but, on the whole, the lupines have disappeared. Here is the story of how we grew them in the first place, how they seemingly failed to grow, eventually prospered and then suddenly vanished. 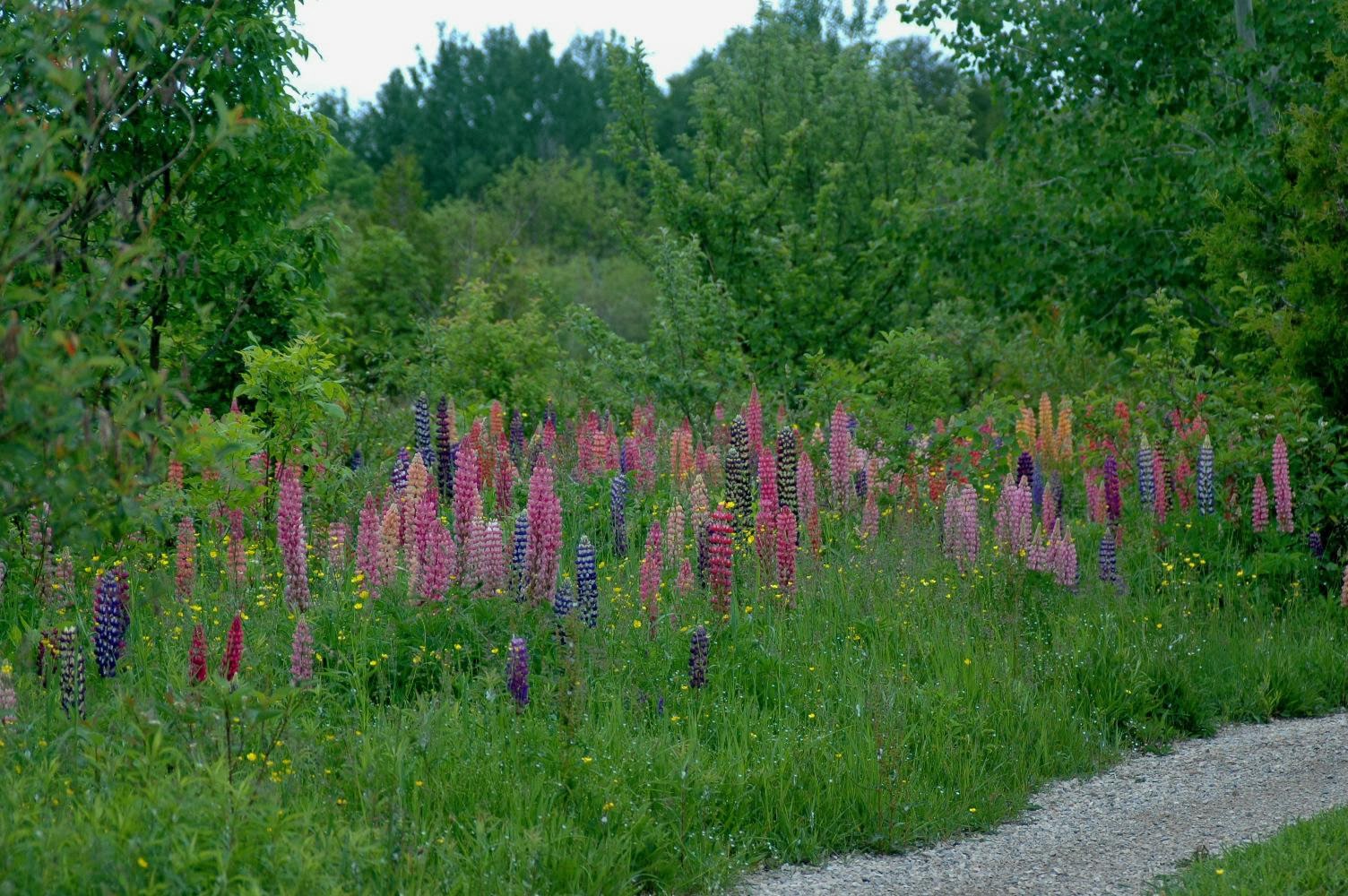 I started Russell lupines in peat pots one spring almost 10 years ago. They grew well, and at the end of the summer I had 54 little plants. I planted them through the grass along the driveway expecting a nice show the following year. However, the second summer there was hardly a trace of my lupines. I found one or two very small plants, while the others seemed to have melted in the grass. I gave up on them, thinking it was another failed experiment. 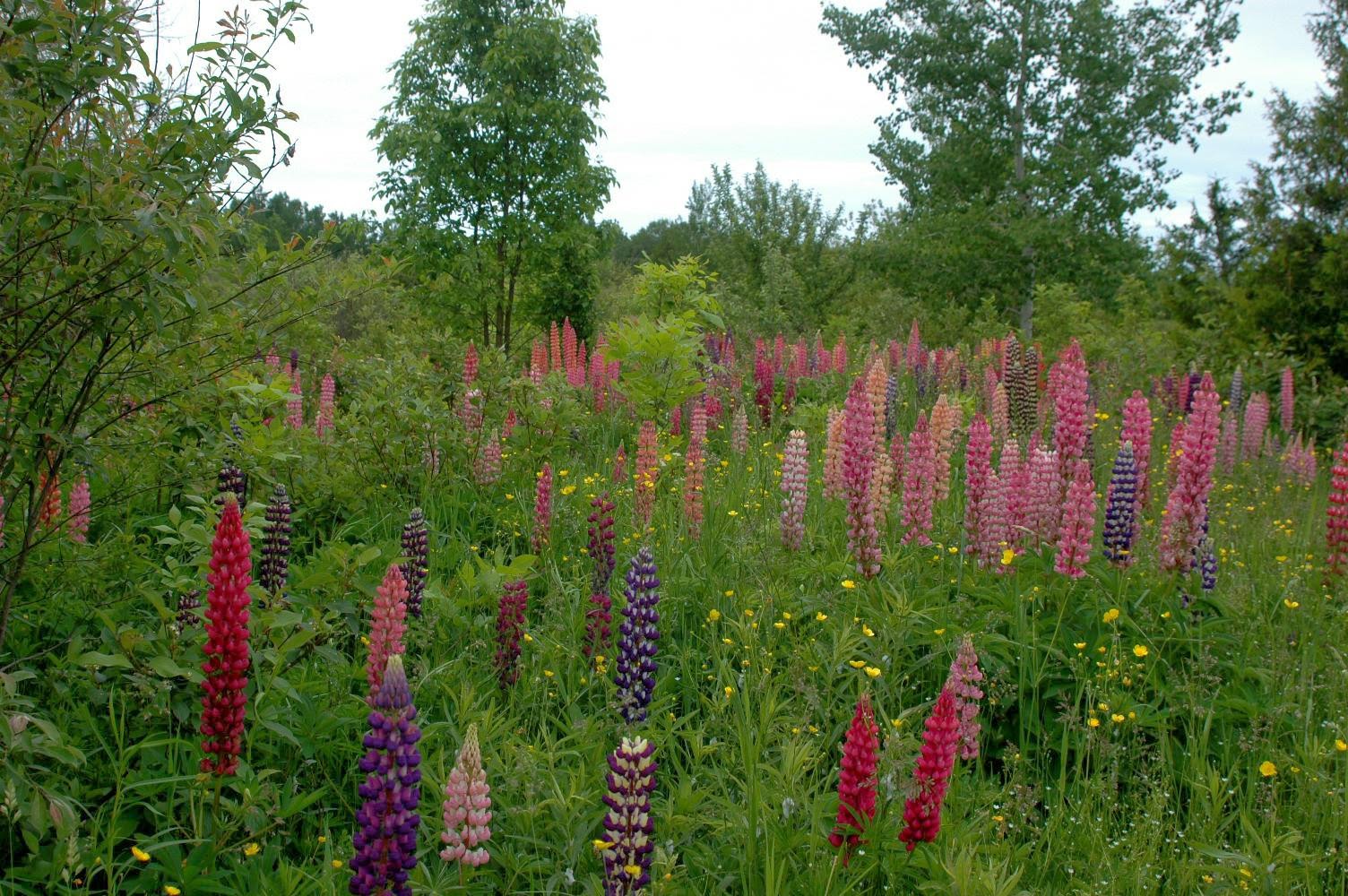 At that time, we only came on weekends to Roche Fleurie and not every single weekend. By a coincidence, it so happened that in the third summer we did not come up at lupine time. However we did the fourth summer. Imagine my amazement when, having written them off and almost forgotten that I had planted them, we took a curve in the road and found ourselves in front of a large drift of magnificent lupines. 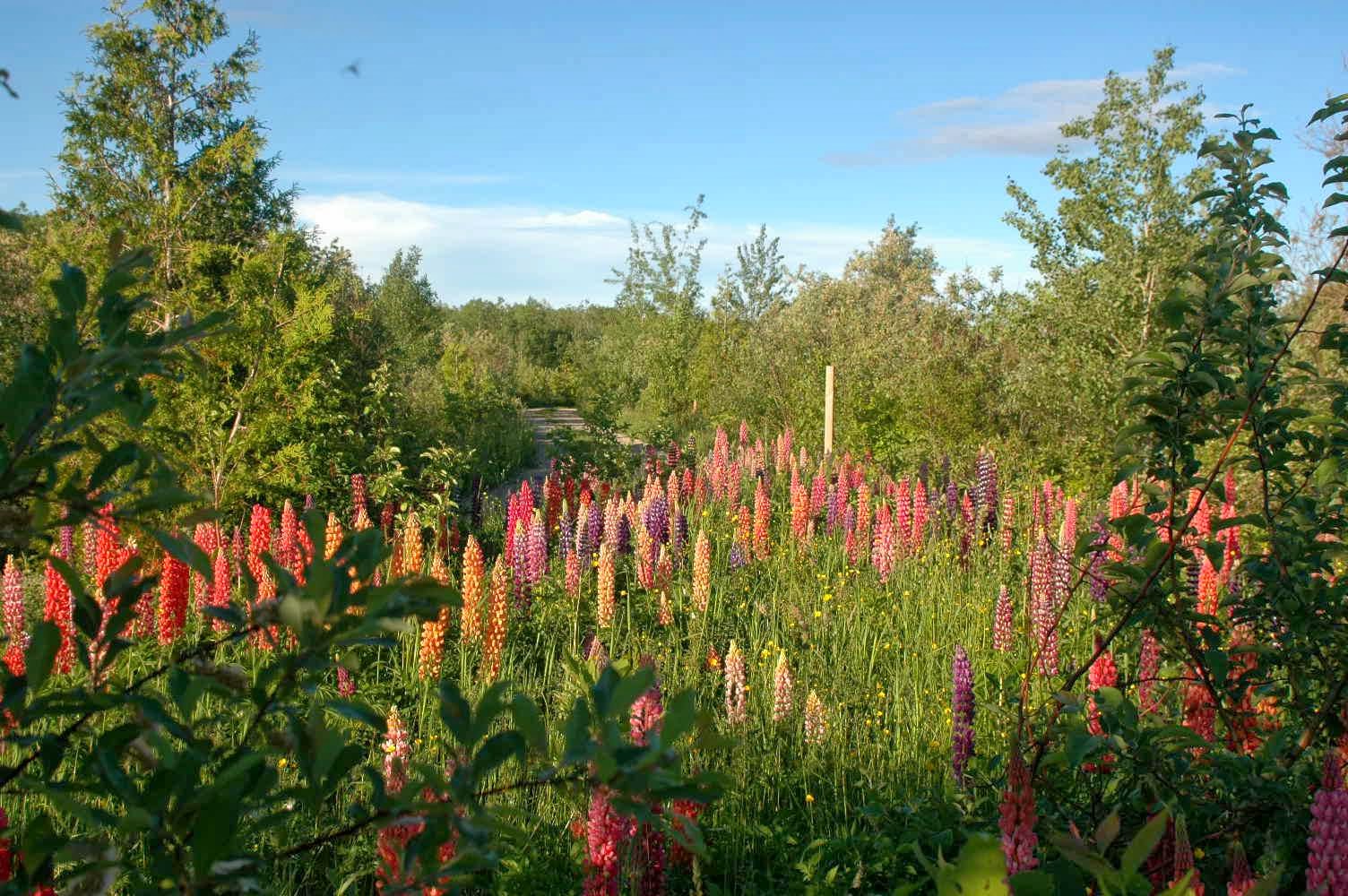 The fifth summer, they were even more numerous, and I thought we had it made. That they would get better and better on their own. Unfortunately, that is not what happened.  In the sixth summer the number of lupines crashed, and there were few left. Nowadays, one or two plants will bloom, but that is it. 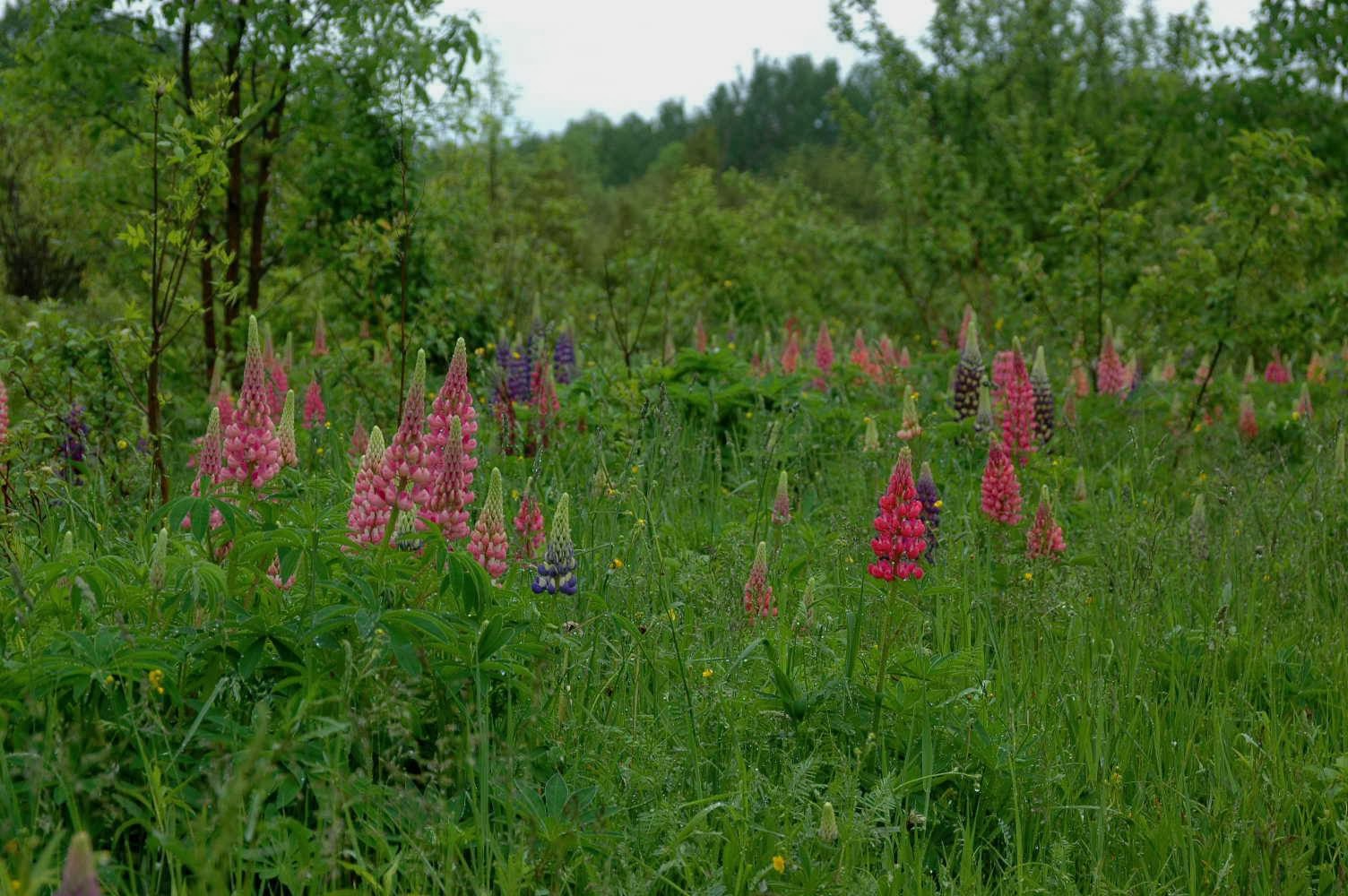 Lupines are what are called short-lived perennials, so it is not surprising that the original ones petered out. However I thought they would continue to self seed as they had started to do. The place where they grew got slightly shadier, enough I suppose to make a difference. Besides, lupines prefer neutral to slightly acidic soil, and so they probably did not like our dolomite limestone. Whatever the reason, unfortunately these lupines now only live only in memory and in photographs. 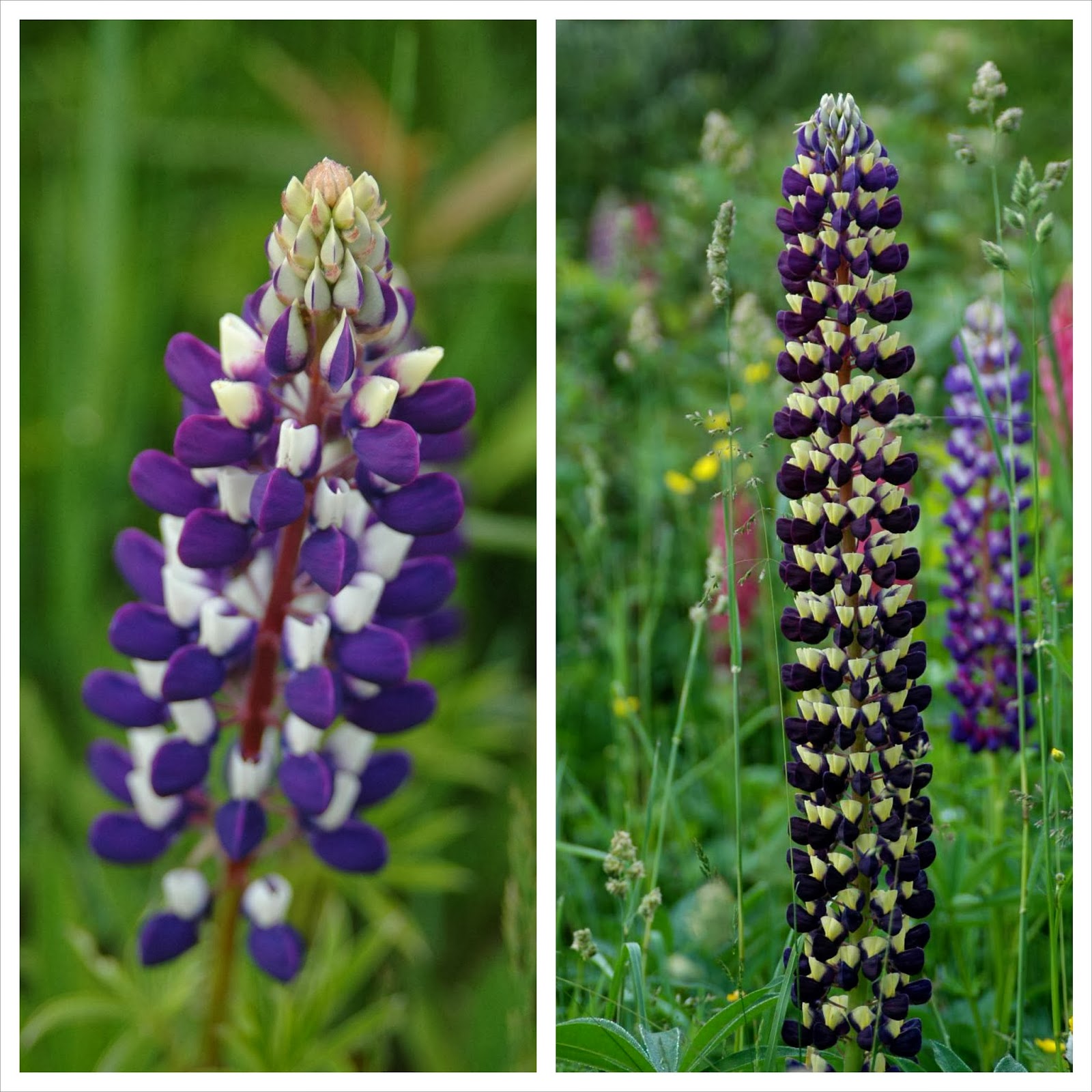 Posted by rochefleuriegarden at 11:26 AM

Email ThisBlogThis!Share to TwitterShare to FacebookShare to Pinterest
Labels: Naturalizing