I mentioned in a previous post that the large yellow Lady'-slipper (Cypripedium pubescens) grows wild around the garden. Nurseries sell them as well as other species and many beautiful hybrids, but they are not easy to grow. On two occasions in the early Roche Fleurie years, when clumps of Lady'-slipper were about to be bulldozed, I tried transplanting them but with no success, even if the large yellow Lady'-slipper is listed as one of the easy Cypripediums to grow in gardens or in pots. So I thought I would read about them to see what their requirements are and compare these to my experience of seeing them grow profusely in the wild. 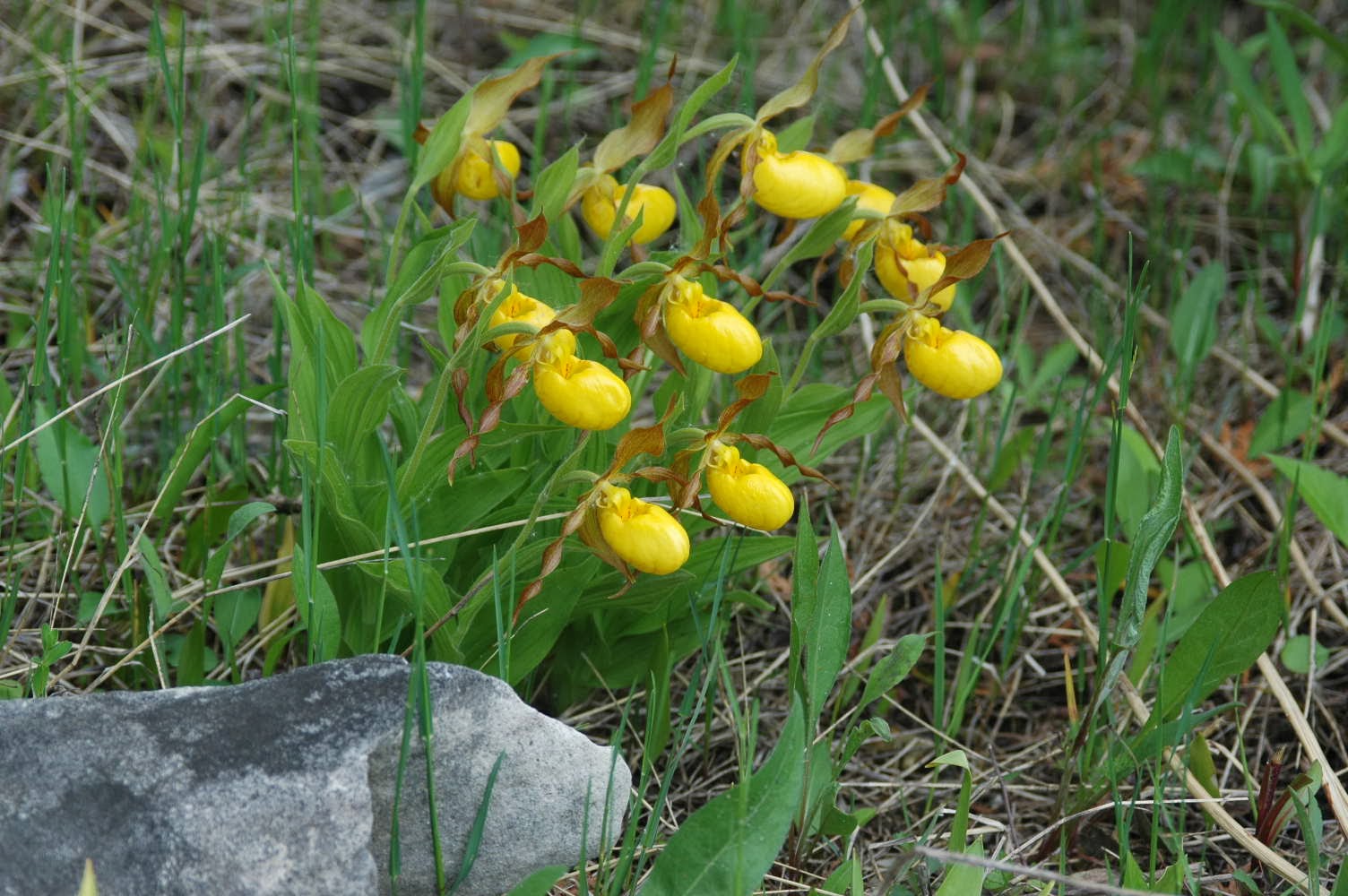 I was under the impression that they needed mycorrhizal fungi to survive. These are microorganisms in the soil which allow plants to "trade" nutrients. It would appear that mycorrhizal fungi are essential for seed germination, but not for growth of the plant. Still, I expect that if you had to transplant one, it would be preferable to move with it a good deal of the soil where it grew initially. 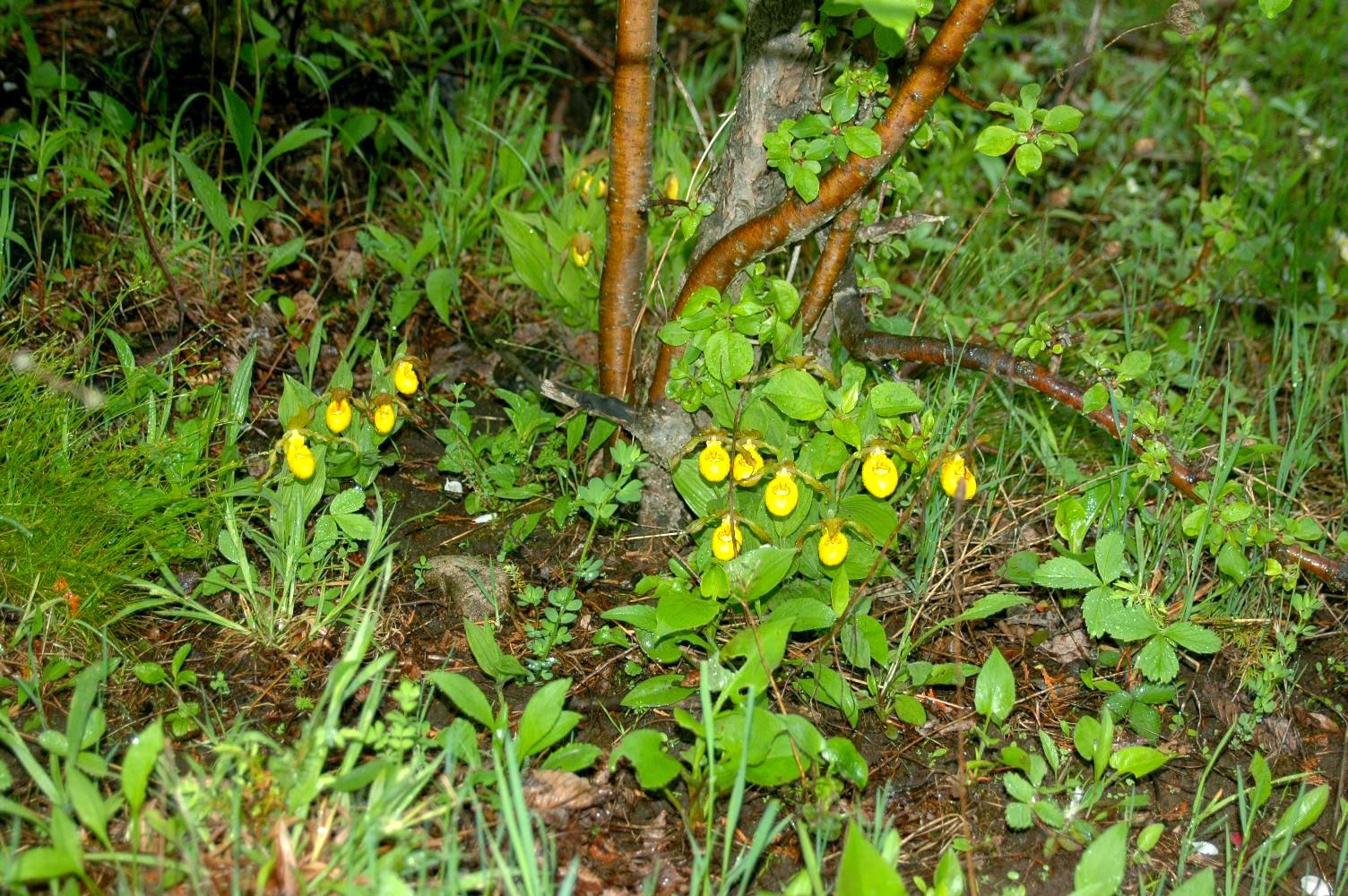 Several sites mention that Cypripidium prefer a slightly acidic soil. Roche Fleurie is on dolomite limestone, so the soil is basic. However, with acid rain, perhaps the first shallow layer of undisturbed soil is acidic. Much more than pH, it would appear that good drainage is the paramount requirement. The ones you see around grow in flat areas, but only in spots that are slightly higher than their surroundings. 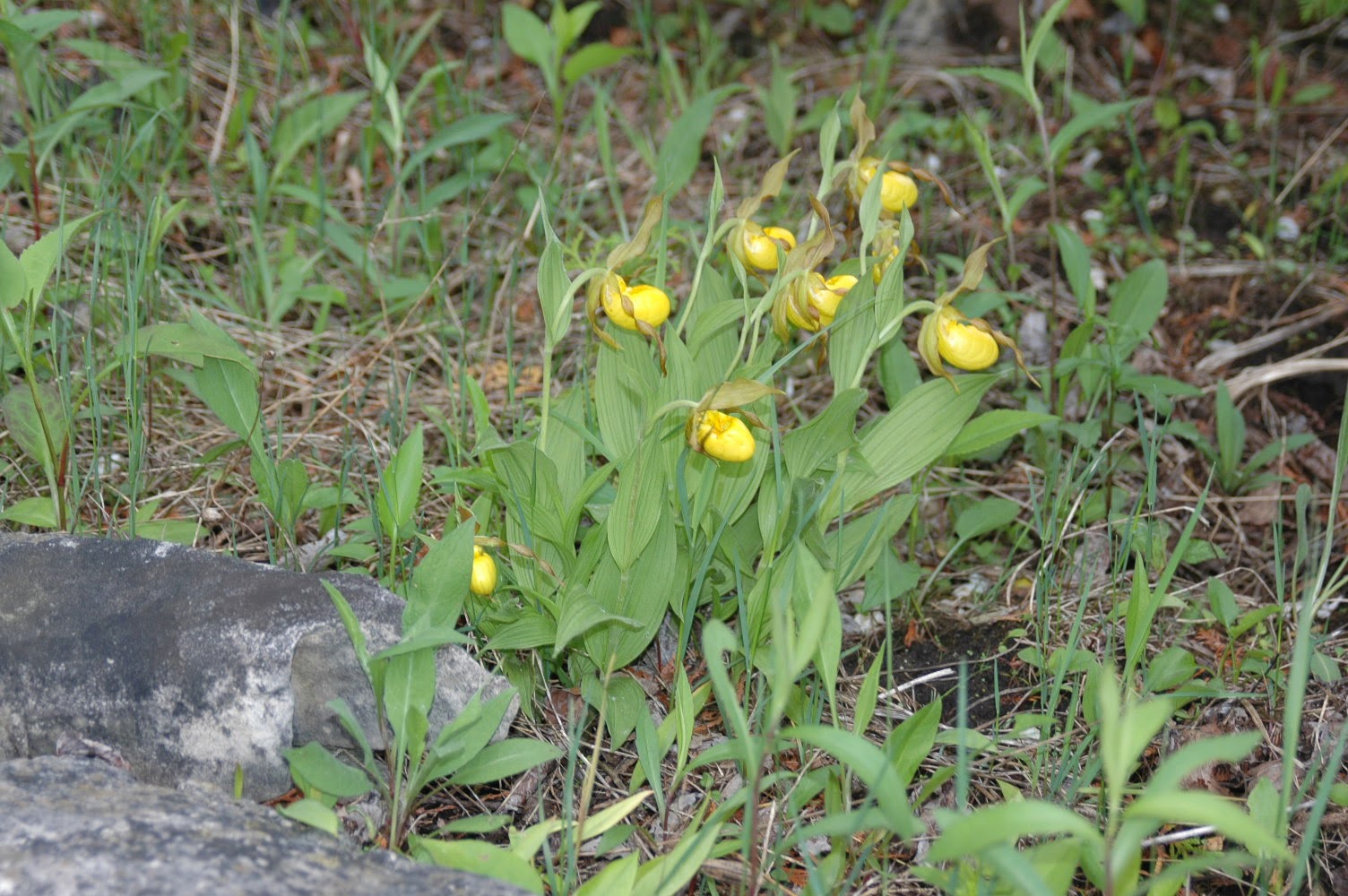 The most surprising thing I learned about them is that Cypripedium roots do not grow in the ground. They lay flat on top of the ground and are covered by compost (in nature dead leaves and debris). This makes orchid sense. The bud for the following year is produced in the late summer or in the fall at the level of the soil or above it. This bud cannot be covered.

You have to make sure they have enough water until they get established. In nature around here, they grow in areas that are quite humid in spring but that get very dry in late summer. By mid to late June they have finished blooming, and they slowly go more or less dormant. This is probably why they are supposed to grow well in a clay pot. You would have to make sure to water early in the season but not later on. 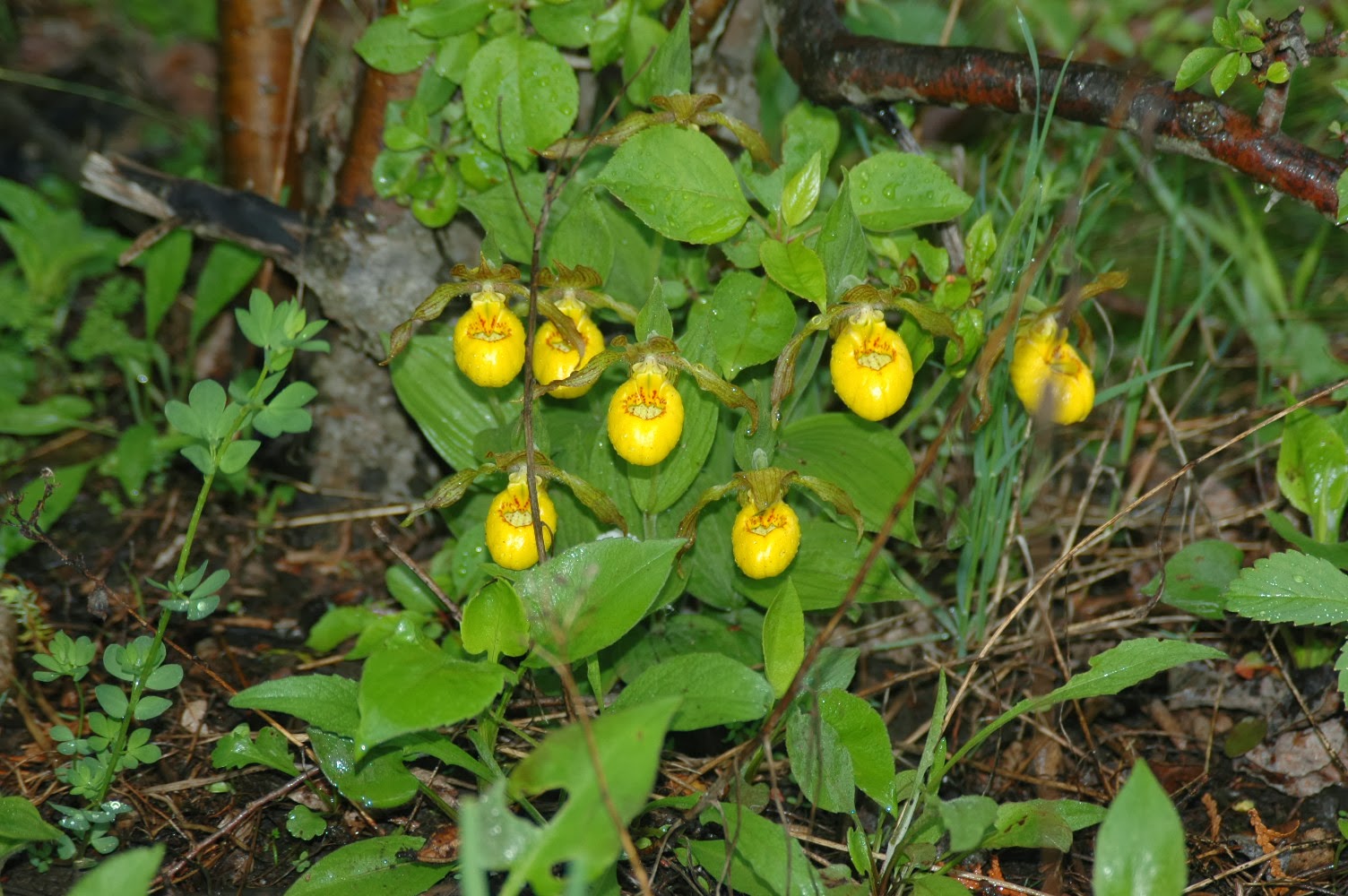 They are to be found under trees or shrubs where they get dappled shade. It is apparently important that they be in a cool spot. I have never seen them volunteer in fertile spots. On the contrary, they grow in rocky,  unprepossessing areas. Two or three years ago, one germinated next to a stone on the edge of a gravel  path and seems to be doing well in the gravel. It bloomed for the first time last year. It gets a couple of hours of sunshine before sunset. The Showy Lady'-slipper (Cypripedium reginae) also grow in the area, but it is not common like the yellow one and it it to be found in bogs or ditches.


Some of the flowers end up with holes in them. I believe that  insects get caught in the pouch and can only escape by tearing a hole. As you often see bumble bees struggling inside them, they must be making these holes.

Apparently, Cypripedium sometimes take a holiday. One year they might not come up at all but could grow and bloom beautifully the following year. This is a very useful piece of information because if your plant disappears, it might only be temporary and you should not disturbed it. 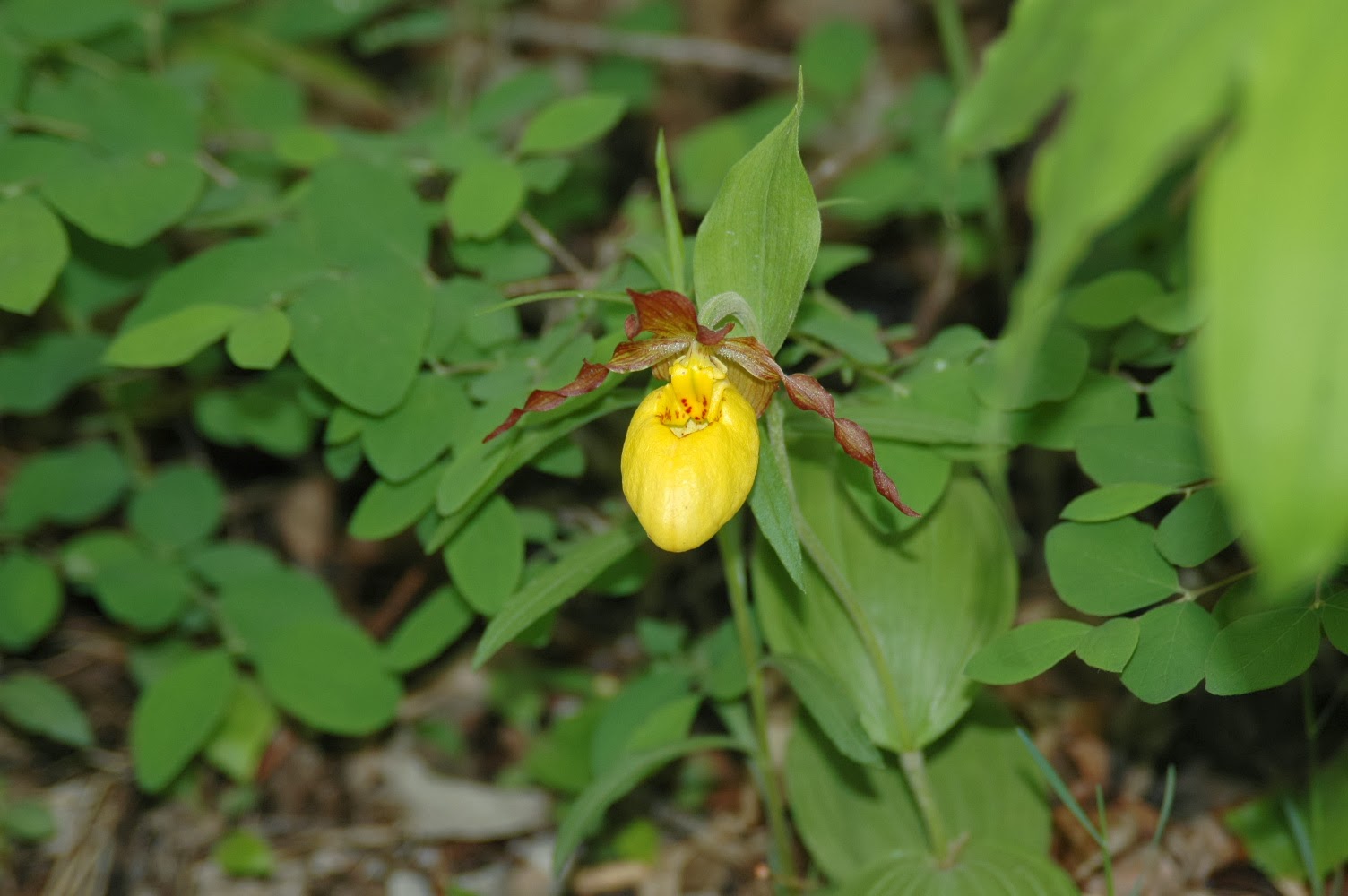 Posted by rochefleuriegarden at 1:22 PM