Pots on the move

It is self evident that an important advantage of growing plants in pots is that they can be moved around. In every garden, there are spots which, at  least part of the time, are drab, if not boring. Pots are very useful to deal with such spots. Moving them to various places allows you not only to brighten a dull corner, but also to see your own garden in a completely different light. 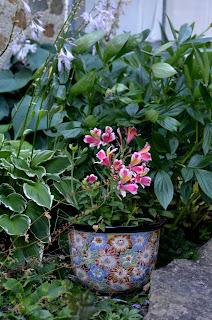 Brightenig up a dull corner is easily done with a colorful pot, especially if it contains bright flowers, as is the case with the Alstroemeria above. But the plant does not even have to be in bloom. The potted fig tree below, changes the dynamic and makes more interesting a border where there is hardly anything  in bloom. 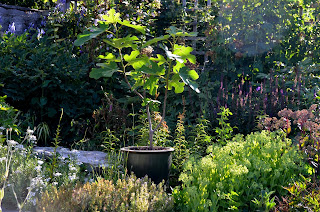 As I mentioned above, pots also help you see your own garden in a different light. To see what I mean, take a pot (with or even without a plant in it) and temporarily move it in as many different places as possible in your garden. I bet that many who try this experiment will end up setting that pot in a place different from where it had initially been put.

Here is an example: a pot of  green foliage (hymenocallis bulbs that have finished blooming) seen in various places. 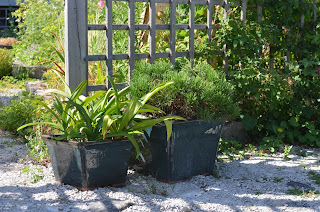 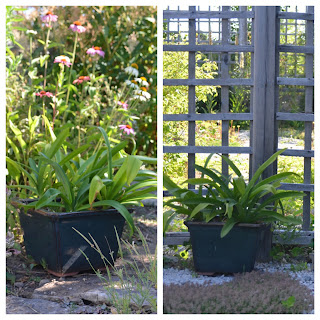 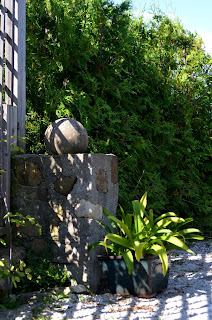 In the end, I decided it looked best half on a raised bed, half on the concrete edge of the bed - a spot I would not have considered  had I not deliberatly set about trying to situate this pot in as many different places as possible. In that raised bed, it creates a very good focal point, and the different colours and shapes of foliage contrast well with the blue-green of the pot. 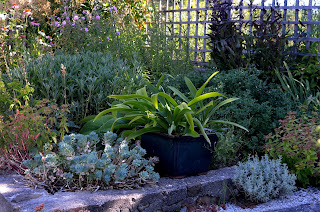 Sometimes a pot can make a big difference mostly by appearing to create order among disparate plantings. Here is the same pot of Alstroemeria in the main border. Once again, the pot acts as a focal point that allows the various elements to come together. 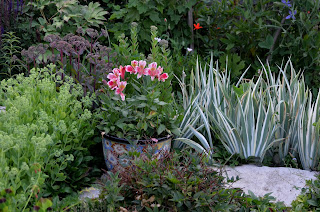 Below, the same pot producing a similar effect on a larger scale. For the purpose of taking pictures, the same pots can be used in many different settings, a trick professional photographers use a lot. 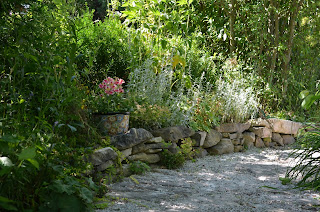 Lilies are particularly amenable to being grown in pots, as they can do just as well in a container of some sort as they do in the ground. They are handy for taking around the garden. In the case of this "Oklahoma" lily, it seems to look good just about anywhere, even inside the porch. 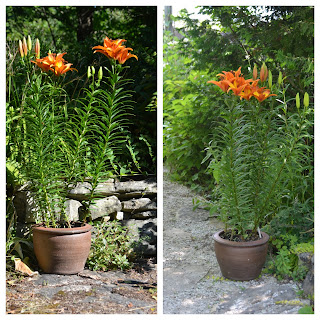 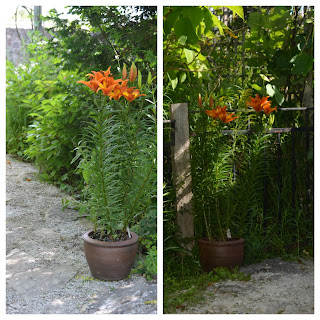 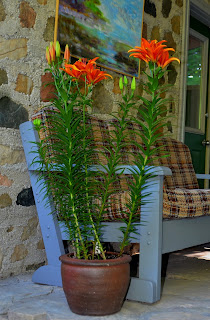 Unfortunately (or perhaps fortunately) some pots have to stay put.  They are too heavy to move around, or the blooms are too fragile, as for instance these tuberous begonias. 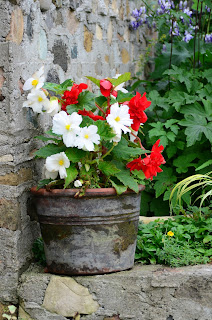 Posted by rochefleuriegarden at 7:56 PM