Teucrium chamaedrys has been described as a garden workhorse. It certainly not demanding and very reliable. It is a low shrub rather than a perennial. Traditionally grown as a medicinal herb, nowadays it is valued both for its flowers and its evergreen foliage.

Attractive to butterflies but deer resistant, it is supposed to prefer alkaline but will grow in acidic soil. It can grow in poor soil, provided it is well-drained.  It prefers full sun. Even if it is originally from the Mediterranean, it is hardy to zone 5 to 9.

The soil here is alkaline, but our oldest plant only gets at most four hours of sunshine (although it gets it mid-day, when the sun is at its strongest). As you can see, it grows at the base of a stone wall. Actually the roots were spread on the limestone and the wall built on top of the germander roots. This gives you an idea of how tough the plant is. It has been happy with this regimen for many years.


Germander is said to bloom in summer or fall. In fact, the plant mentioned above which grows in part shade blooms only in late September, while the cultivar “Summer Sunshine”, which is grown in full sun, blooms for us in June. "Summer Sunshine" is a Canadian selection discovered as a sport of the plain green species form, by Jack Broxholme of Burlington, Ontario around 1999. 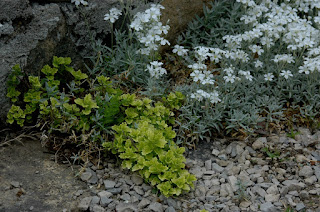 The older plant, grown from seed, seems to be sturdier. I trim off most of the foliage just after the snow had melted. It survives the winter quite well, but it comes through a bit bedraggled (crushed by the weight of the snow).

A good pruning encourages new growth. This severe pruning I give it in spring might explain why it blooms late. By the time it is covered with flowers in later September, it is about two feet wide and a foot and a half tall. The name germander is considered to be a corruption of Chamaedrys. Chamaedrys means "ground oak", which refers to the shape of the leaf. 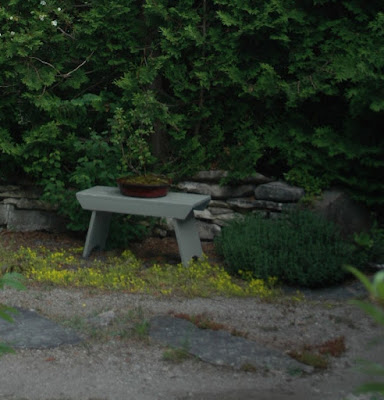 “Summer Sunshine”, not being as vigorous, only gets a light pruning. The fact that the foliage is yellow might interfere with photosynthesis which would explain why it is not as vigorous.

Ours grows close to a patch of Cerastium tomentosum. I let the thuggish Snow-in-Summer partially invade the germander in the spring as they look quite good growing together.  Yellow early in the year, the foliage slowly turns darker and is green by the time the plant flowers in summer.

We also have a native germander – Teucrium Canadense. An attractive, but weedy, plant which selfseeds in a shady corner. It is rather nice and can survive in a lot of shade but each spring I try to remove most of it as it is too invasive to be welcome. Contrarily to Teucrium chamaedry, this germander is happy in the only area of the garden that has acidic soil.

Posted by rochefleuriegarden at 10:21 AM